YOUR DESIGNATED DRIVER TO (AND FROM) DEVOUR!

Devour! The Food Film Fest is making it easier for city dwellers to get to and from the film festival. Thanks to our partners at Sip and Taste Tours, the Devour! Express Shuttle will now offer additional departure times and rides. The return-trip costs just $20.00 per person and leaves for Wolfville daily  at from the Halifax Marriott Harbourfront Hotel at 1919 Upper Water Street. Guests are encouraged to congregate at the front entrance where the bus will pull up curbside. The return ride back to the Halifax Marriott leaves Wolfville from the Devour! bus stop across from the Al Whittle Theatre on Linden at Main. 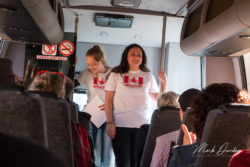 _____
Devour! The Food Film Fest is an international festival celebrating cinema, food and wine culture. The five-day festival takes place in the culinary epicentre of Nova Scotia – the towns of Wolfville, Kentville and out into Kings County. The festival is an experiential celebration of food on film, the culture of food and the dramatic impact it has on our day-to-day lives. The eighth edition of Devour! The Food Film Fest takes place October 23-28, 2018.