Menu Released for A Taste of Devour! At Fox Harb’r Resort

Wallace, N.S. (May 10, 2016) – Don’t miss your chance to get a sneak peek of all things Devour! The Food Film Fest through an experiential weekend at the prestigious Fox Harb’r Resort from May 14-15, 2016. Join chef Michael Howell and Fox Harb’r executive chef Shane Robilliard in a collaboration of two culinary titans – Devour! style.

From beginning to end, the weekend-long program promises to be a mouth-watering experience with guests being treated to locally sourced food, fine wines and award-winning films paired with the breathtaking back drop of the one of the country’s finest luxury resorts.

Following a cocktail reception, cooking demonstrations and a tour of Devonian Coast’s Jost Vineyard, guests will have the opportunity to enjoy a pre-dinner chat and book-signing with proud Devour! alum, The Globe and Mail’s Lucy Waverman. From there, each will enjoy the ultimate food film experience over delicious a five-course dinner.

The film and food menu: 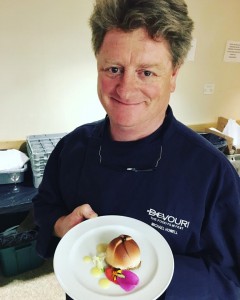 Stay tuned for an East Coast vs. West Coast Tiramisu Battle. Who will win? Find out this weekend at Fox Harb’r Resort!

ABOUT DEVOUR! THE FOOD FILM FEST

Devour! The Food Film Fest is an international festival celebrating cinema, food and wine culture. The five-day festival takes place in the culinary epicentre of Nova Scotia – the town of Wolfville, Kings County. The festival is an experiential celebration of food on film, the culture of food and the dramatic impact it has on our day-to-day lives. The sixth edition of Devour! The Food Film Fest is slated for November 2-6, 2016.

In the late 90s, co-founder of the Tim Horton’s coffee empire, Ron Joyce, had a vision that would transform rural Nova Scotia and place the province on the map internationally. This led him to Fox Harbour and later, the completion of the Fox Harb’r Resort, where the Atlantic Ocean meets the rugged Northumberland shoreline. Here guests experience luxury with an award winning golf course of Graham Cooke’s design, a culinary tour-de-force featuring the best the Atlantic has to offer, manor style suites and townhouses accompanied by full service spa amenities, a world class clay shooting facility and marina. Guests also have access to Jetport, the onsite private landing strip and charter service which has welcomed the world to Nova Scotia over the past 15 years. Today Fox Harb’r is synonymous with maritime splendor having hosted everyone from pro-golfers to presidents, corporate leaders to celebrities for a unique Atlantic Canadian experience.