Bring your well-used copy of any of Lidia’s amazing cookbooks, or pick up a brand new copy of the FELIDIA cookbook for Chef Bastianich to sign for you, hot off the press!

Sponsored by the Italian Trade Commission; this will take place in the VIP Lounge at Devour! HQ. Free admission. 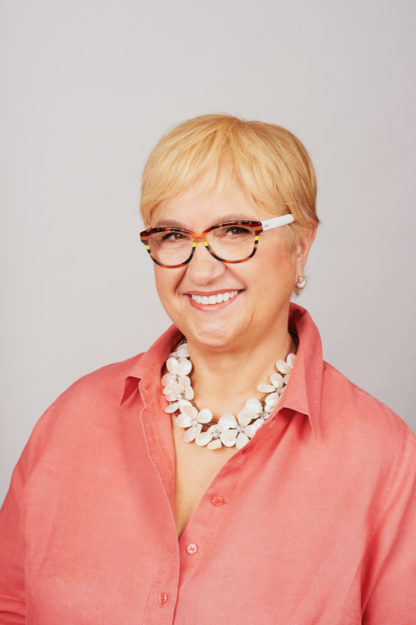 “Everyone knows me as a chef, TV host, restaurateur, and author,” says Lidia Bastianich. “But I am also a refugee who has lived the American dream.”

Lidia grew up behind the Iron Curtain in Pola, a small city on the southern tip of the Istrian Peninsula. While in many ways she enjoyed an idyllic childhood—it was an old world life, spent close to the land in her grandmother’s backyard and in vineyards, orchards, and courtyards—her family suffered under Yugoslavia’s communist regime, eventually becoming one of its targets.

“While life seemed great for me at the time, what I didn’t know as a child was how communism took away almost everything my family stood for. Communists changed our last name. We couldn’t speak our native Italian language. They took away our religion; I even had to be baptized in secret! Communism threatened my dad’s business. So we were forced to flee,” Lidia says.

In 1956, Lidia and her family escaped across the border to Trieste, Italy, where they spent two years in the refugee camp of the Risiera di San Sabba, grim barracks that used to be a Nazi concentration camp. During her time there, Lidia helped the nuns of the school she attended by cooking in the kitchen—her first taste of working in a big commercial kitchen. Finally, in 1958, sponsored by Catholic Charities, the family boarded a plane to New York.

Lidia vividly remembers the kindness they received when arriving in America. “Complete strangers and nonprofit organizations were willing to give us a home, fill our cupboards with food, and find my parents a job. There was so much generosity and to this day we have so much gratitude for the people and organizations that helped us when we most needed it.”

In her new memoir, My American Dream: A Life of Love, Family, and Food, Lidia takes readers from her life under communism, a dramatic escape across the border and life as a refugee, to her journey to America—penniless—and the launch of her food business. She describes the struggle to open her flagship Manhattan restaurant, Felidia, and all the accolades that followed, including the night that Julia Child and James Beard came to dine (which later resulted in the launch of Lidia’s TV career). The rest, they say, is history.

Today, Lidia is an Emmy Award-winning public television host, a best-­selling cookbook author with a dozen books published to date, a successful restaurateur, and owner of a flourishing food and entertainment business. Most importantly, Lidia has accomplished all of this by marrying her two passions in life—her family and food—to create multiple culinary endeavors alongside her two children, Joseph and Tanya.

Lidia’s cookbooks, co-authored with her daughter Tanya, include Lidia’s Celebrate Like an Italian, Lidia’s Mastering the Art of Italian Cuisine, Lidia’s Commonsense Italian Cooking, Lidia’s Favorite Recipes, Lidia’s Italy in America, Lidia Cooks from the Heart of Italy, and Lidia’s Italy—all companion books to the Emmy winning and four-time nominated television series Lidia’s Kitchen, Lidia’s Italy in America, and Lidia’s Italy. Lidia is the owner/co-owner of four acclaimed New York City restaurants—Felidia, Becco, Esca, and Del Posto—as well as Lidia’s Pittsburgh and Lidia’s Kansas City along with her daughter Tanya. Together with Tanya and son-in-law Corrado, Lidia also has developed a line of artisanal pastas and all-natural sauces, LIDIA’S, which are sold at fine food stores nationwide.

Lidia is a member of Les Dames D’Escoffier and founding member of Women Chefs and Restaurateurs—two non-profit organizations of women leaders in the food and hospitality industries. She is also a champion for the United Nations Association of the United States of America’s Adopt-A-Future program, in support of refugee education.

Among the numerous awards and accolades Lidia has earned are seven James Beard Awards (Outstanding Chef, Television Food Show, Best Chefs in America, Who’s Who of Food & Beverage in America, Specials 2016, Special 2017 and 2018), and two Emmy Awards for Outstanding Culinary Host (2013 and 2018).

But perhaps her most treasured honor was when she was chosen by Pope Benedict (2008) and also Pope Francis (2015) to cook for them during their much-lauded visits to New York City. For Lidia, food remains a medium—a way of connecting with others. “In this world today, more than ever, sitting together to connect with family and friends is so important,” she adds. “We may have hundreds of friends on social media, but our real friends are the ones we share meals with. Sharing food is a way to connect and nurture others with something you made.”